Battlesight gunnery is a method of engagement that is faster than precision gunnery because, unlike precision gunnery, it uses preselected ammunition and range settings.  The preselected information is the 'battlecarry' and is determined based on the expected targets, engagement ranges, and ammunition characteristics.  There are generally two types of battlecarry: ballistic battlecarry and extended battlecarry.  For demonstrative purposes, the Bradley 25mm is used. 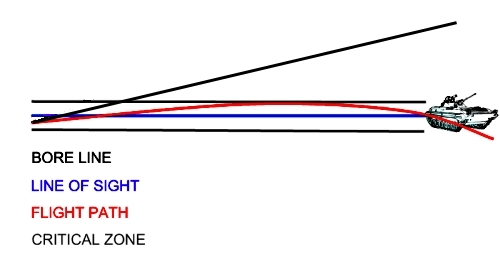 In order to understand how the battlecarry is determined, it is helpful to know a little bit about ballistic flight paths.  When a bullet is fired it begins to lose velocity due to air drag and begins to fall due to gravity as soon as it leaves the muzzle.  For this reason, the bore of the barrel is pointed upwards with respect to the line of sight.  The degree to which the bore is pointed above the line of sight in order to strike a target at any given range is referred to as the 'superelevation' required for that range.  When the bore is superelevated, the trajectory of a fired bullet will assume a path that is roughly parabolic in shape.  The apex or the highest point of the parabola is referred to as the 'maximum ordinate' which is expressed as the distance between the flight path and the line of sight at that point.  The critical zone is determined by the height of the expected target.  (When determining the range at which to battlesight zero a rifle for antipersonnel use, the critical zone is usually several inches, the diameter of the vital zone at the center mass of a human target.)

Given that information, the most appropriate ammunition is selected for the expected target.  The height of the expected target is divided in half.  And using data from firing tables for the selected ammunition, the range at which the maximum ordinate is one half the target height is selected as the battlecarry range.  Thus, if the superelevation is set for the battlecarry range, a burst should impact, rather than over or under shoot the target so long as the target is within the battlesight range band.  So during a battlesight engagement, the gunner need not determine, set the range, and confirm it with a sensing round; he need only fire a burst at the target's center of mass and then burst-on-target from that point.

For the Bradley's 25mm, using a PC as the most likely target, the battlecarry range is 1200 with a corresponding battlesight range band of 0 to 1,400 meters for AP.

Extended battlecarry is determined much the same way as ballistic battlecarry.  It is used when the expected engagement ranges exceed the maximum point blank range or the far edge of the ballistic battlesight range band.  The above table is taken from the Bradley gunnery field manual and provides ballistic and extended battlesight range bands and their corresponding battlecarry superelevation range settings.  (N.B.  M919 refers to the APFSDS-T cartridge, M791 the APDS-T cartridge, and M792 the HEI-T cartridge.)

CAVEAT:  When preparing to engage targets at extreme ranges, be aware that the standard deviation of rounds from the mean point of impact, or the round dispersion, will noticeably effect accuracy.  Precision gunnery and determination of actual range may be necessary to successfully service the target.